There was article in the FORBES magazine under such name about Asel Ayapova.. Personally it is very pleasant to me to realize that I promoted it is Aynur Seitovoy suggested the journalist to interview it that is called connected them, and there was such big article! I thank the editorial office of the magazine for support of my offer! I thank #AsselAyapova for the fact that she is such – our star!

Today – drones to surprise nobody with unmanned aerial vehicles any more. If earlier the scope of drones generally fell on military industrial complex (about 65%), then, according to the research ARK Invest, by 2020 32% of drones will be used in agrobusiness, 3% in the oil and gas industry and 0.3% in logistics. Drones are already actively used for aerial photography, patrol, monitoring, data collection and information and so forth. 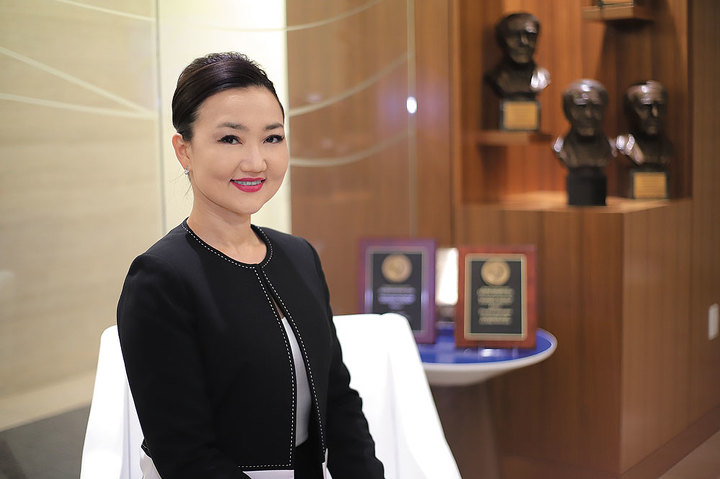 Photo: archive of the press service

Use of robotics opens great opportunities and in the power industry – the way which plans, under construction and supported steady power sources is automated. One of large American power corporations AES entering into Fortune 500 actively introduces use of drones for increase in safety, effective collecting the standardized data and reduction of risk of threat for human life.

In the AES company headquarters with offices in 15 countries of the world and number of staff more than 12 thousand people a kazakhstanka Asel Ayapova directs three years the program for introduction of robotics with team of 600 employees. Its main task is implementation of drones more than in 100 different businesses of corporation. In an interview of Forbes Woman Kazakhstan Asel told about developments, risks and plans for the future. Besides the primary activity in AES Asel plans to share experience in the sphere of program control and to develop own course on training.

F: Tell why you chose the sphere of project management and what your activity in the AES company began with.

– Still being a student, I wanted to specialize in project management therefore I upon termination of MSU decided to try the hand in Investment fund of Kazakhstan. For years of work in IFC got good experience and knowledge and it was convinced that I want to develop as the expert and the professional in the sphere of project management. After that I held various senior positions, and in 2011 began to work in the American company “AES Kazakhstan”. In six years of work successfully finished two large construction projects on expansion of power of the Ust-Kamenogorsk and Sogrinsky combined heat and power plant. Thanks to effective management our projects were won at the international competitions APEX among 600 projects of the AES company. In 2017 I received the invitation from head office to direct the global innovative program for development, the decision and introduction of methods of use of drones and robots in power objects of corporation. Of course, considering the prospect of such work, I admitted the invitation to the American office and with enthusiasm was accepted to the project.

F: What directly enters your work and what projects you supervise now?

– Our program – strategically important for AES corporation as we with team change old methods of work for more effective, safe and fast. We implement the program on coal, gas, solar, wind and hydroelectric power stations in 15 countries. As the head of the program, I am the main facilitator between businesses of corporation, partners from the industry of drones, developers therefore my tasks include creation of a system, collecting the necessary resources, involvement of experts, identification of risks and management of the project of all interested parties. Under my management are made testing of different technologies on our objects and demonstration of results for all stations for further practical application.

The program includes about 18 different projects, and one of them – the pilot project with Google.

Google collects data on wind stations – thousands of photos of defects of wind stations – and carries out identification of types of defects by means of programming. Then division according to categories of risks and the automated analysis of information is carried out. In April we will present our project at the largest San-Francisco Google Cloud Next conference in the world where more than 30 thousand people will take part.

F: How does the decision to use drones facilitate work in power business? And as far as use of drones in business really saves means and time?

– Present that the company should remove indicators of electric lines somewhere in the desert. Earlier there would send the whole team of workers, would spend several days, would involve the special equipment. At power plants high risks of defeat by current, receiving burns, injuries and falling from height. With drones of the company save precious time, and, above all – use of robotics excludes the risks connected with threat for life of people. In fact, drones can collect data more effective and more safely, monitor objects at big height, underground, in water and in inaccessible places. For last year the AES company saved $10 million in 15 countries, and more than 57 thousand hours of risky works were executed by drones. About 100 new decisions on inspections are developed by drones, were trained 170 repair engineers and now are the certified pilots of drones. In all businesses of AES operational standards and procedures of inspection and repair work are now revised.

At the same time the cost of drones varies. The simplest industrial drone costs from $1.5 thousand to 7 thousand, more progressive – from $22 thousand. 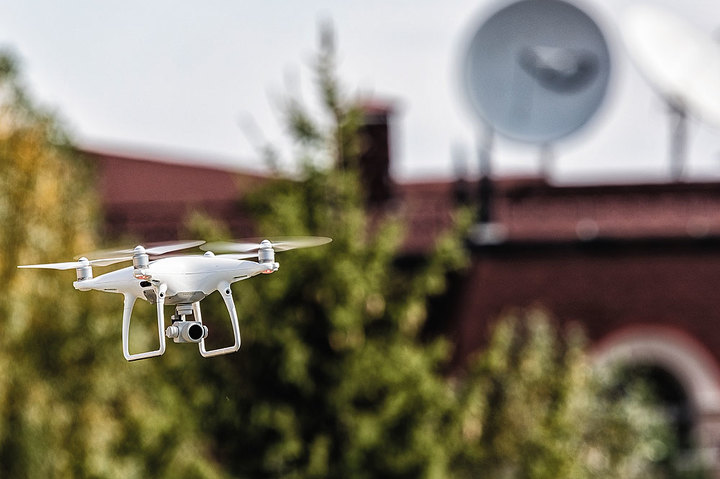 F: What main problems can you note in the market of drones?

– First, the mad speed of changes in the market of robotics. Business needs to be aware of new technologies and developments, the usovershenstvuyushchikh working processes. Secondly, problems at the level of the legislative base on use of drones. For example, in the USA use of drones is regulated by the Federal Aviation Agency. Often the manufacturing companies together with representatives of the industries operating drones update legislative standards according to changes of technologies. And in some countries use of drones is not allowed at all, for example, in Jordan or India very difficult to get permission that, of course, is an essential barrier to development of the sphere in the country.

F: How do new technologies influence work and motivation of personnel?

– People are afraid of new technologies and loss of the jobs. In order that use of drones was fast and comfortable, we explain to people that they will not lose the places. We train workers in control of these drones and we suggest to train for a new profession, gain new knowledge and skills. For example, it is correct to operate the UAV, to read reports on the done operation of the drone and so forth. The main thing – to create the good training program, it is correct to build processes and to teach to use engineers the gained knowledge in practice. It is more favorable to companies to train the personnel, than to constantly pay service contractors for service. I believe that more and more businesses will use drones as a part of operational process in daily work.

F: What would not you in the activity?

– For project-manager it is very important to build accurately work, to plan and consider risks at each stage of the project. Downtime, misuse of resources can yield to the company multimillion losses. If expensive projects are late on terms, then it can influence the budget of all project very strongly. Even unforeseen risks, for example possible rise in price of currency, bankruptcy of producer, change of the legislation, it is desirable to consider and put when planning this or that work on the project. Competent risk management – the main criterion of success. If something goes not so, it is necessary to have “plan B” always. Certainly, as well as in any work, the human factor is very important – each member of the team has to burn with the project, all have to believe in success and work for the benefit of common cause. Pessimists can have negative effect on an environment and reduce motivation of other members of the team therefore it is better to remove such people from the project at once. Personally I with work was always helped by emotional stability. I consider important in any difficult situation to remain human, to be able to put myself to the place of another at decision-making.

F: Tell about results and the achievements for last year.

– The program under my management gained recognition in the power industry of the USA and in the industry of pilotless devices. In 2018 we took the second place in AUVSI Awards 2018 on use of drones in category Operations and Safety (by the way, the first place belongs to NASA). Also made a speech at a panel UAV Expo 2018 session together with leaders in the power industry and experts of UAV. Entered the final of S&P Platts Global Energy Award 2018 for Commercial Technologies of the Year. The AES corporation was recognized the most innovative in the power industry, and these platforms and competitions are the most authoritative in the industry.

I was invited to enter advisory council of the International coalition on drones and robots in power where I will share experience with other world companies and also to participate in development of normative documents. Became the member of Association of women in the industry of drones. Still there is a wish to tell that I am proud of the fact that I was appointed the goodwill ambassador on science and innovations in MO Expo and Woman.

F: Let’s talk a little about personal. How at you does it turn out to combine family, three children and work?

– Always I try to maintain balance between career and private life, to find time for the hobbies, travel and sport. I am helped by rigid time-management and accurate planning. I precisely know whom and where I want to be in 10 years. With the same accuracy I try to paint the plans for the next year, three and five years. The plan for year is distributed on months and days effectively to combine work, personal and professional development and also to pay attention to family.

F: How do you consider in what your secret of success?

– Diligence and continuous development. Also ability to build up business relations with representatives from the different industries irrespective of their status, cultural and language distinctions.

Presently reputation – all this. Along with professionalism and competences, certainly, an important part of success – competently built selfbrending, especially during a didzhitalization era. I believe that success comes to those who act and are not afraid of mistakes who persistently and selflessly goes to goals.

F: What plans for the future at you?

– I plan to receive MBA degree at one of the rating American universities and to try as the top manager in business in the sphere of green power. Abroad I perceive the experience as an excellent opportunity to pump over the skills, to build an effective netvorking and to accumulate the gained knowledge for development of the country. In the near future besides implementation of already available projects I would like to pay more attention to a mentoring of talented Kazakhstan youth, to share the gained knowledge, practices. For this purpose I plan to create platforms on training of the experts who are interested in project management and programs in the nearest future.

Also with pleasure could participate in domestic innovative projects with work in the USA and thus promote transfer of the advanced innovative solutions, technologies and innovations from the USA to Kazakhstan. I am a patriot of the country and I want to be useful in the homeland. My long-term plans are connected with Kazakhstan.